In 1767, the east end of Pot Island was laid out to Nehemiah Rogers, and the west end to Roswell Pond. The island remained in the hands of various members of the Rogers and Baldwin families until 1846 when it was sold by Ammi Baldwin to William Bryan (or Brien) of Branford. At this time in US history, the growth of trade and manufacturing in the United States resulted in increased wealth and urbanization, which gave rise to a demand for a new type of leisure opportunity, the summer resort. 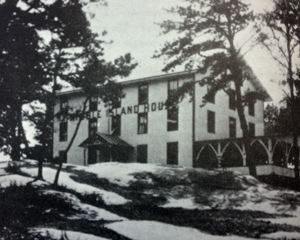 Mr. Bryan erected the Thimble Islands’ first hotel, Thimble Island House, on his newly acquired Pot Island. In the hotel’s first year, Bryan capitalized on the popular legend of Captain Kidd, and also offered an opportunity for fishing and for invalids to enjoy the fresh air. The idea of a day on the water also appealed to New Haven residents, suffering from the summer’s heat. In it’s first season, the  resort’s success enabled Mr. Bryan to add 2 bowling alleys. With the completion of the New Haven and New London railroad in 1852, 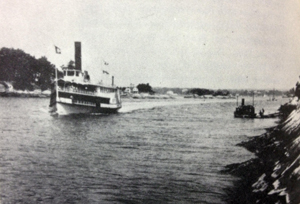 Stony Creek and the outlying islands became more accessible to visitors. By 1855, there were regular steamboat cruises around the Thimble Islands, sometimes carrying up to 300 passengers. Among the many recreation and relaxation opportunities at Thimble Island House, the annual clambake on Pot Island was a not-to-be-missed attraction!

The first of many group outings to Thimble Island House was booked by the Young Men’s Christian Association of the Methodist Episcopal Church in August of 1857.  There was fishing for the men, bathing for the children and fresh air

and  a welcome change of scene for the busy mothers.

During the Civil War, no steamers were run, and the hotel seems to have been temporarily closed. In 1864, William Bryan’s son decided to move on to other ventures, and he sold Pot Island to William Harrison Barnes. Genial and popular, Mr. Barnes operated the hotel for the next 32 years. In 1896, it passed into the hands of William Henry Barnes, who ran it somewhat sporadically for the next ten years. In 1912, the island was purchased by the Madison Avenue Presbyterian Church of New York City for use as a summer vacation home for the mothers and working women of New York City. The island served as the church’s summer “camp” until 1928. For several summers, the island was unoccupied, then it was leased to private families during the first few years of the 1930’s. In 1937, the church sold the island to Reverend Dr. John L. Davis of New York who used it as a summer home.

* A privateer is a private person or ship authorized by a government by letters of marque to attack foreign shipping during wartime.