Excerpted from A Brief History of the Thimble Islands in Branford, Connecticut
by Archibald Hanna

The New England shore and all its outlying islands were formed as a result of a dramatic rise in the level of the ocean after the last ice age. Because the Thimble Islands are made of  a crystalline rock of great hardness, they survived erosion from rivers and the grinding of the great ice sheet.  Pot Island (also known as Pot Rock Island, Treasure Island  or Kidd Island), the location of Thimble Island House, is named because of its pot holes, left behind by the glacier.

The colorful recorded history of the Thimble Islands begins in 1614, with their discovery by Adrian Block (for whom Rhode Island’s Block Island is named).  Adrian Block, a Dutchman, was in the service of the Dutch East India Company. In 1614, he sailed up the East River from Manhattan aboard his 16 ton yacht named the “Onrust” or “Restless”.  As a result of Adrian Block’s explorations, the Dutch East India Company established several trading posts in Connecticut. 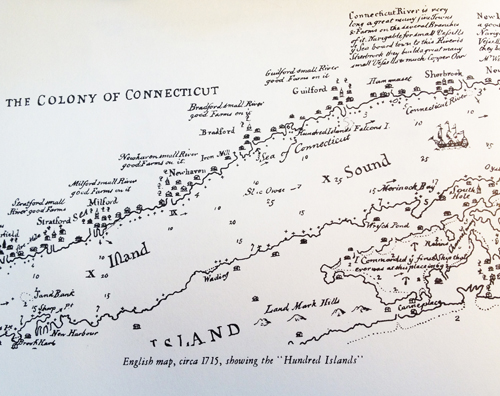 The first maps of the area refer to the Thimble Islands as “The Hundred Islands”. The earliest record of the “Thimble Islands” name appears on a deed recorded in 1739. Local tradition tells us that the islands were named for the thimbleberry (or black raspberry) which flourished on islands at the time.

Another interesting bit of local folklore concerns the infamous privateer* turned pirate, Captain Kidd. Upon learning that he was wanted for piracy, Captain Kidd sailed for Oyster Bay, NY to begin negotiations with Lord Bellomont, his former employer. Kidd was persuaded to come ashore, and he sailed for Boston in July of 1699 – perhaps passing through the Thimble Islands along the way. Upon arrival, Kidd was arrested and shipped to London for trial. He was found guilty of piracy and hanged in May of 1701.

The American Revolution drew concerns, but no real threat to the Thimble Islands. Although there was British Naval activity along the New England coastline, the anchorage among the Thimble Islands was too shallow and the channel too intricate for a Man-of-War. Nonetheless, the residents of Branford, fearing that the islands would provide a screen for the movements of the British, voted that “the proprietors of the islands lying off this town called Thimble Islands be requested to consent that all the timber and wood growing thereon may be forthwith cut and carried off therefrom”.

During this time, the islands had little economic value. Too small and rocky for farming, their principal use was for fishing, oystering and the gathering of seaweed for fertilizer.  Some of the islands were used as pastures for livestock.

One thought on “History of the Thimble Islands”